There's a new library in town. 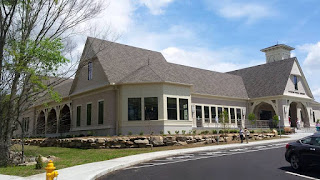 Larry and I attended the dedication of the brand new Tiverton Public Library. This was a project fourteen years plus in the making, and the results are just beautiful. The building itself is lovely, and according to many who spoke, very functional. There are free-standing computer workstations throughout. I was also told my existing library card will still work, and ordering books online will remain the same.

The event began with a local Boy Scout color guard, who led the Pledge of Allegiance. Larry, of course, took off his hat. The rest of us stood and recited what we learned so long ago in elementary school with hands held over our hearts. I teared up a little, and felt sad at all the controversy over this very patriotic ceremony. I just love it. 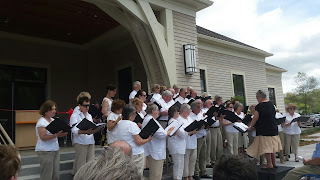 Next, the Greater Tiverton Community Chorus sang "From Sea to Shining Sea", by Samuel A. Ward. This is the chorus I sing in once a year. I plan to go back just to sing again this summer as well, but won't be here for the late August concerts. They did a beautiful job, and made me tear up again! I hooted loudly at the end feeling so proud of all my friends up there. I wished I was with them. They also ended the ceremony with a beautiful and very appropriate song, "Take Care of This House", by Leonard Bernstein. "...this house is the hope of us All." Lovely words. 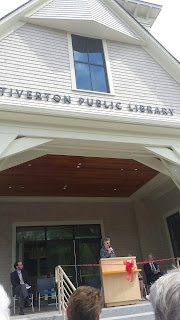 Local people spoke about their love of this project and all the hard work that went into make this dream a reality. A particular favorite was Brett Pelletier, Town Council Liaison. He quoted his favorite author, P. G. Wodehouse, with "Right Ho!" to all involved, referencing his "Right Ho, Jeeves" book.

The keynote speaker was Michael J. Tougias, whose best-selling book, "King Phillip's War", includes this town and Little Compton's roles in that war. I bought a copy and asked him to autograph it. His latest book, "The Finest Hours", will be made into a Disney action movie set to come out in 2016. His entertaining speech talked about how libraries influenced his life in three different phases: when he was thirteen and got into lots of trouble in school, at age thirty when he began to write, and at age fifty when he continued to do research for his writing. He praised librarians and archivists for all their hard work, and credited their efforts to making his research and published works a success.

Larry also has shared with me how the principal of his middle school told his parents to, "get that boy to a library!" His parents followed that advice and now he is a successful Ph.D. Physicist. Libraries also played a huge role in my life. It was a place to get away from home at night, and meet my friends. I also got some work done that could not otherwise be done at home. I wonder if today's children will use the library in the same ways we did growing up.

After the ribbon-cutting ceremony, we were all invited in for refreshments and to see the new library. We were very impressed, and glad we attended. Even though we didn't vote for the library, we will support it and use it about as much as we do now. It could be what the speakers called, "the Crown Jewel" of our town, and use of its building is "only limited by our imaginations". Let's assume they are all right, and it becomes the community jewel everyone hopes for. Congratulations to everyone who made it happen. It really is a lovely addition to our little town.


Posted by Kathy Crowley-Gardner at 10:17 AM

Kathy Crowley-Gardner
I retired over a decade ago, and have spent my time exploring the next phase of my Life. I began by blogging and moved into traveling with my husband and writing a children's book series called Logie Bear & Friends Adventures available on Amazon.com.