Yesterday was our thirteenth wedding anniversary. After shopping for TV stands to eat on, travel mugs and other sundry items, we decided to head into town. Our plan was to ride the pontoon across Lake Murray to Liberty on the Lake for a nice dinner. The water looked choppy as we drank coffee on our deck, so we decided to wait and see how the day progressed. We "bagged" the idea later because we just wanted to eat early and get home to our little pups.

We headed to the SC Wildlife store on Assembly Street only to discover it's gone. But we noticed a sign on the State House grounds saying, "Public Tours Today". What a great idea, we thought. Neither of us have ever taken a tour of a State House, anywhere we've lived. So, we went in the Public Entrance, got through the security scanner where Larry had to leave his "sharps", and waited with several other people for someone to guide us into an auditorium.

There, a nice man with a thick SC accent, gave us a little lecture about the state seal and the state flag, especially the crescent moon. He explained that current beliefs about the crescent moon on the flag have changed. Experts now believe that instead of the moon being flown along side the Palmetto tree on our state flag, the crescent shape is instead a Gorget. Then he showed us a picture of young George Washington wearing one around his neck as an example. Next, he played a video about "The State House: Tempered by the past. Poised for the future." I thought that was a cool motto. 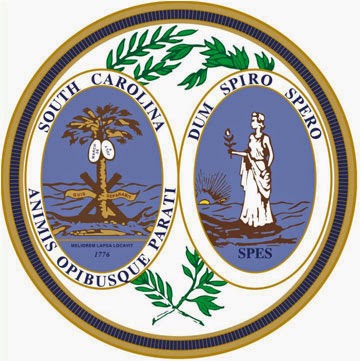 Before playing the video, though, he expressed another interesting fact. The Palmetto tree became the state tree after a major attack on Fort Sullivan on Sullivan's Island off the coast of Charleston during the American Revolution in 1776. Fort Sullivan was built with the only resource available: Palmetto trees. These trees are more grass than tree and very pliable. When the British shot cannon balls at the fort, the balls just embedded themselves in the log walls and caused no damage at all. Discouraged, the British moved on.

After the video, we began our walking tour of this magnificent building. Our tour began in the lower lobby where the Governor and Lt. Governor's office wings are located. He explained where Gov. Nikki Haley holds press conferences. This man obviously likes and respects Gov. Haley. He called her the "friendliest governor to date", and declared her very resourceful. He used an example of her friendliness as the time a third-grade class was on tour. She took time to meet the class and sign autographs. Nobody had paper, so she signed the backs of each of the children's hands with a pen as an example of her resourcefulness.

The architecture of this lobby was exquisite. SC blue granite columns supported a beautiful arched ceiling painted white and up-lit that was comprised of handmade, irregular red-clay bricks made close-by from river mud. There is a memorial by the Broad River dedicated to the Irish slaves who built the canal. I thought of these slaves making bricks that created this beautiful ceiling. I don't know if this part is true, but that's what I thought about while walking around. The floor was tiled in pink Tennessee and white Georgia marble squares. The completed work is just stunning.

We ascended a lovely iron staircase that I thought was also beautiful. Who sees an iron staircase anymore? Portraits of individuals who made a difference in South Carolina lined the walls. Lovely artwork depicting wars with Francis Marion, or "the Swamp Fox", were also prominently displayed.

A large sculpture of John C.Calhoun was the centerpiece of the fourier connecting the House of Representatives and State Senate chambers. Among other things, his most important role was that of Vice President to two different Presidents: Andrew Jackson and John Quincy Adams. During the reign of Jackson/Calhoun, the country was run by two SC boys. Although, it is said that only Andrew Jackson's Mama knows that he was really born in SC. Apparently, NC also claims he was born there. He declares his SC birth in his will, but the word of his Mama won out everyone else.

A wonderful painting was displayed outside the Senate chambers depicting what the guide said was the only painting showing a negro in battle. This young man was sixteen years old, and saved the life of his commander. He was also a free man.

We toured both chambers and heard all about the current building being the third State House built. It is completely made of stone because the other two burned down. It was begun in 1855, but when the Civil War broke out and ended, SC was broke. The current building was not completed until 1907. Sherman's troops fired Cannon balls at the building, but the holes were never repaired. Instead, it was decided that bronze stars placed over the holes would be cheaper than repairing them. The stars remain to this day.

There is also a bronze statue of George Washington in front of the State House building. His staff was broken by Sherman's troops too as soldiers threw bricks at it until it broke. Our tour guide explained that they must have thought the statue was of a local dignitary. Keeping with the no repair policy of the state, a bronze plaque placed at the base of this statue explaining what happened was deemed cheaper than repairing the staff.

The State House grounds are also quite beautiful and create a lovely, shady park in which to rest or read while visiting or take a lunch break. We enjoyed our visit, and were really glad we did it. A nice man in the gift shop stamped a State House Guide with yesterday's date for us as a memento because I said I was from Boston.

One empty granite base stood within site of the State House building. It's plaque stated that it once held a cannon from the Spanish American War that was removed in 1942 and contributed as scrap-iron for use in World War II. Interesting, huh?

After our visit, we decided to head to Five Points, a neighborhood mainly geared to the college crowd from the University of South Carolina. Our goal was to have a nice, fancy dinner at Garibaldi's, a restaurant frequented by Larry's old USC thesis advisor. But, it didn't open for another hour. We crossed the street to find another nice restaurant above Starbuck's, but that too would not open for another hour. So, in frustration, we headed to Delaney's for a pint and a snack to kill time until we could get our fancy-schmancy anniversary dinner. We found out it was BOGO night (By One Get One entree), so we stayed for dinner instead. We realized that we were more interested in saving a few bucks than splurging.

We dropped our Toyota Tacoma pickup off at the dealer and were driving a rental. The dealer called to announce that repairs for the U-Joint and Differential, etc. would cost several thousand dollars! Really? We said to fix it since we decided spending this money was still cheaper than buying a new truck. We had a great time at Delaney's and thoroughly enjoyed our day. After getting home to feed the pups, we each took a shot of Maker's Mark out to the deck to watch the evening descend upon us. What a lovely anniversary.

Posted by Kathy Crowley-Gardner at 11:34 AM

Kathy Crowley-Gardner
I retired over a decade ago, and have spent my time exploring the next phase of my Life. I began by blogging and moved into traveling with my husband and writing a children's book series called Logie Bear & Friends Adventures available on Amazon.com.